Researchers from Leiden University, together with TU Delft, SRON, and others, have discovered a new form of 'quantum liquid'. Advanced knowledge of superconducting materials, gained in part through astronomical research and the development of quantum computers, was a key factor in the research. However, although this new quantum fluid is demonstrated, it is still completely unexplainable. Indeed, it turns a number of standard theories upside down. The results are published in Science.

Virtually all materials resist electrical currents, even copper, of which our electrical grid is made. And that is by no means always a bad thing: think, for example, of the old-fashioned light bulbs: their glow, and heat, came from the high electrical resistance of tungsten, the little wire in the middle of the bulb. But as always, there is an exception to the rule: a special class of materials that transport electricity without resistance, but only when they are cooled below certain (extremely low) temperatures. These materials are called superconductors, and how they work is one of the enduring mysteries of physics.

Of course, there are theories that explain why some materials become superconducting: once cooled to near absolute zero, the electrons in the material pair up to form 'Cooper pairs'. These Cooper pairs then form a so-called quantum fluid, which flows effortlessly, and therefore without resistance, through the crystal. The formation of the Cooper pairs and the quantum fluid is supposed to take place simultaneously.

This assumption turns out not to be entirely correct. Koen Bastiaans, now a postdoc at TU Delft, has discovered that Cooper pairs can still exist above the superconducting transition temperature, where they form a new mysterious quantum fluid state that is no longer superconducting. 'This means that the formation of Cooper pairs is not the same process as condensation itself,' says Bastiaans, 'For me, this has completely changed the way I think about superconductivity.' 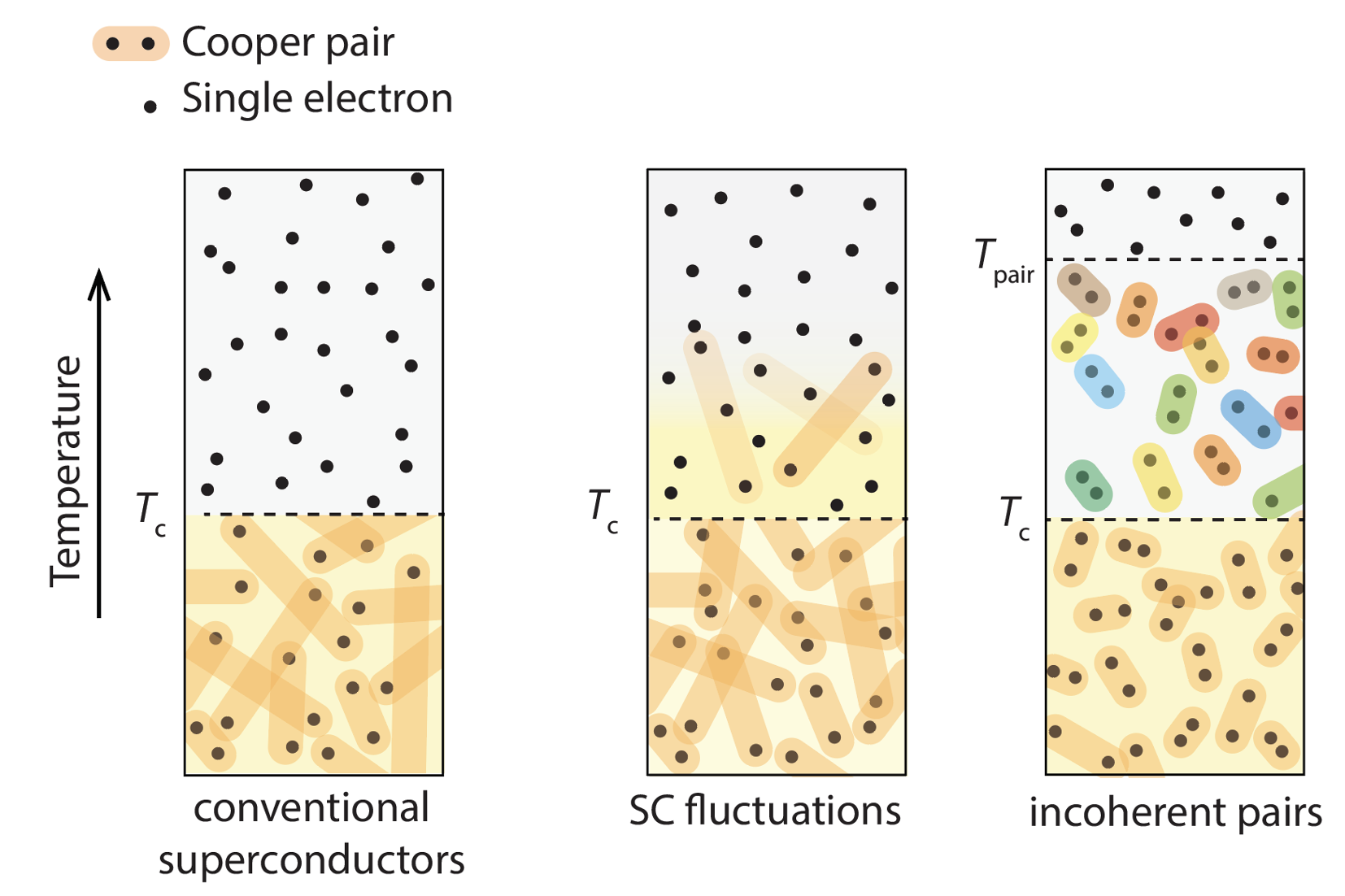 Koen Bastiaans' research was carried out in close collaboration with Delft University of Technology and SRON, and focused on the superconductor TiN (titanium nitride). To detect the Cooper pairs, a technique was pioneered that makes it possible to 'listen' to the electrons in the superconductors. If these are single electrons, the noise profile is different from when the electrons form Cooper pairs. 'It's a bit like listening to raindrops falling on the roof,' Bastiaans explains, 'as the drops get thicker, the sound of the rain changes.'

The researchers measured the sound in superconducting TiN, which clearly showed that at low temperature the material consists of Cooper pairs. That is what they expected. Then they slowly raised the temperature past 2.95 kelvin (2.95 degrees above absolute zero, or -273 degrees Celsius). At that point, the superconductivity in TiN disappears, as expected, but as a big surprise, the Cooper pairs appeared to remain. 'This is the discovery,' says Bastiaans. 'Cooper pairs continue to exist until the temperature reaches about 7.2 kelvin. So you can have Cooper pairs without condensation and superconductivity. There have been hints that this was possible, but never irrefutable proof. The Cooper pairs we have found represent a new kind of quantum fluid.'

Superconducting materials are used to make highly sophisticated detection devices, which can for example measure single photons or minute amounts of infrared radiation from distant celestial bodies. To further improve these detection methods, more knowledge of the underlying physics is needed. Pieter de Visser, scientist at EEMCS and SRON, and David Thoen, cleanroom engineer at EEMCS, helped Bastiaans by supplying the titanium nitride samples. De Visser: 'We show that technological development and fundamental science go hand in hand. While we try to understand the science behind an observation technique for astronomy, we unravel fundamentally new physics together with other researchers.

Want to read more about the applications of superconducting materials? Read our article on DESHIMA: a research initiative where scientists travelled to the extreme Atacama desert in Chili to look for the faint traces of the oldest light in the universe.