Without a dedicated propulsion system, nano-satellite platforms can never totally realize the potential of replacing their larger counterparts, imposing a limit on the exponential growth that CubeSats launches have shown in recent years. Propulsive capabilities would enable them to engage in a wider range of missions such as those characterized by many satellites flying in formation or in a constellation, possibly even in very low-altitude orbits. The strict mass, volume, and power limitations typically imposed by nano-satellite requirements need unique micro-technologies to help develop a compliant propulsion system. Micro-ElectroMechanical Systems (MEMS) at a micro-scale size and high level integration are very good examples of suitable technologies for this class of satellites.

In the aerospace industry there is currently a growing interest in green, non-toxic propellants. Unfortunately, especially when chemical propulsion concepts are considered, a large portion of the good-performance propellants are apt to be a very active chemical, and most of them are corrosive, flammable, and/or toxic. An alternative is to use electro-thermal propulsion, which allows good performance but also the use of “green” propellants. One of the most typical “green” propellant choices is the use of an inert gas. However, this leads to large storage tanks or, alternatively, to excessively high tank pressures. Ice or liquid water are other potentially promising green propellants, due to their high mass density and low molecular mass.

The Space Engineering Department is well known for its work on the design, development and launch of educational nano-satellites. The study and development of micro-propulsion systems for this class of small satellites is one of the most important short to medium term objectives in our current roadmap. We are presently researching two types of water-propelled micro-resistojets, mostly based on MEMS technologies: a low-pressure free molecular concept, and a more conventional one based on vaporization of liquid water. Both these concepts offer several advantages, including: high integration capability, small volume, light mass, fast response, high thrust-mass ratio, high reliability, and easy applicability to a thruster array. They offer very similar performance but, at the same time, they are complementary to each other in terms of operational conditions (in particular, the allowed propellant storage temperature and pressure). The MEMS components of these thrusters are manufactured through a collaboration with TU Delft’s Else Kooi Laboratory, taking advantage of the wide expertise of this partner in advanced MEMS systems research.

Table: Target performance of the two micro-propulsion concepts when used in a typical CubeSat mission, under comparable operational conditions with the same amount of propellant.

In parallel, the group is also actively researching other advanced and unconventional micro-propulsion concepts. To this end, a research project has recently been started, aiming at studying a prototype of solar thermal system capable of efficiently co-generating electric/thermal power and propulsion in small spacecraft. The integrated system under consideration includes one or more solar concentrators, transferring thermal power to the working fluid of a high‑temperature Organic Rankine Cycle turbogenerator, and to one or more thrusters. Its main innovation is to effectively combine the two functions of power generation and space propulsion into a single integrated system, by using part of the solar thermal energy for propulsion and employing the turbogenerator discharge heat for energy storage or thermal control.

A prototype of the free molecular micro-thruster (not including the main tank). The green rectangular area in the center is the heating/expansion slot, which in this case includes an array of circularly-shaped channels.

Microscope detail of some of the circular heating/expansion channels of the prototype shown in the previous picture. 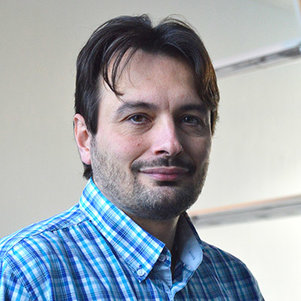