An interdisciplinary research team within the Faculty of Architecture and the Built Environment is developing a circular business model based on the use of multifunctional façades as performance-delivering tools. Under this scheme, the client is no longer the owner of the building envelope and its integrated building services, but instead leases them from a service provider through a long-term performance contract. Rather than purchase the façade panels as a product, the client hires the energy performance and user comfort services delivered to his building by this new façade system.

This strategy could decrease the initial investment required for the renovation and construction of high performance building envelopes. This could, in turn, increase the rate and depth of technical improvement on both new buildings and building energy renovations, leading to the update of a large number of buildings across Europe which are in urgent need of technical retrofit. Façade Leasing could, meanwhile, accelerate the market uptake of new building technologies, and optimize the reuse and recycling of components and materials within the construction industry, by keeping these technologies in the hands of their manufacturers.

The growing need for faster and more effective building renovations

Accelerating the rate and depth of energy renovations in buildings is one of the biggest challenges currently facing the construction industry. Across Europe, a large number of buildings constructed during the post-war boom of the 1950’s to 1970’s are quickly reaching the end of their original service life. Their façades and building systems are far below current standards, their energy consumption is unsustainably high, their spaces are in many cases uncomfortable and dysfunctional, and, as if this wasn’t enough, they are also very expensive to maintain. In the case of Dutch universities alone, almost 60% of the building portfolio of 14 universities studied dates back to before the 1980’s. This represents hundreds of thousands of square meters of façades which need to be substantially improved in the coming decades if we are to meet emission reduction goals set by the European Union and the Paris Agreement. And yet, it is but a small sample of millions of square meters of commercial, residential, and public space across the continent which require similar and immediate action.

Bottlenecks in the current renovation process

Today’s process for retrofitting an existing building, or to improve the planned energy performance of a new construction, is difficult and involves a sensitive collaboration between a number of parties with, in many cases, conflicting financial incentives and commercial interests. The increasing range and complexity of building technologies makes product selection challenging. Knowledge transfer barriers between the parties manufacturing these components, and those responsible for their maintenance and operation, can result in a suboptimal selection and operation of these systems. The companies responsible for developing and supplying these technologies are in most cases marginalized to a secondary role, and keep no direct interest in the long-term performance of their products, which regularly end up being disposed of by the client at the end of their service life, resulting in an unnecessary production of waste and the loss of valuable products and materials. For all these reasons, it becomes difficult to evaluate and monitor the ongoing benefits of a performance improvement project in terms of energy use, carbon footprint, resource consumption, or economic gains.

A circular approach to new building engineering and retrofit

The principle of circular economic development is to preserve components and materials within closed loops of either biological or technical nutrients, while maximizing the conserved value for any particular component. A circular building is not seen as a cradle-to-grave project, in which materials come in at the start, are used for a limited amount of time, and are turned into waste or recycled into raw elements at the end, but as an ongoing process in which building components are constantly replaced with new and more efficient ones, while the old ones are broken down into spare parts which can be reused to produce the following technological generation. The transition towards this new way for working, however, requires an extensive reorganization of incentives and responsibilities across all stakeholders in the construction value chain.

Performance contracts, in other words the shift from an economic system based on the sale of products to one based on the provision of services, can play a determinant role in the economic and environmental feasibility of both future new constructions and renovations. By outsourcing the management and upgrade of technological systems to the suppliers responsible for developing them, we can achieve a faster market uptake of new and more efficient systems, while reducing the initial investment requirements of developers and building owners. Circular industrial loops are also facilitated, as suppliers who retain the ownership of their products have a significant incentive to extract maximum value from them as they reach the end of their service-life.

Innovation in product and process

Façade leasing as a combined strategy relies on recent innovation on two fields: On one hand, technological innovation in the form of multifunctional façades results in building envelopes which have the potential of delivering an ongoing indoor comfort service. This can be done through the use of decentralized, façade-integrated building support systems which replace the traditional installations running through the ceilings and hallways of traditional constructions. The current range of such decentralized technologies has expanded to include a wide spectrum of energy generating technologies, air-handling systems, electric and communication infrastructure, and even advanced profit-generating elements such as media screens, or air-filtering solutions such as green façades. The placement of all these components on the exterior layer of the building does not only facilitate their maintenance and replacement, it also enhances the capacity of the façade to not simply protect the indoor spaces from the weather, but actively generate the energy required to control and monitor the indoor comfort conditions which it also provides. 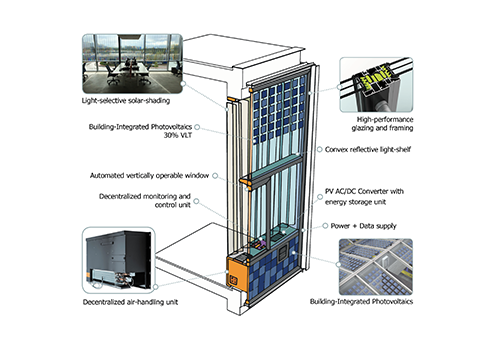 On the other hand, innovation in business and management practices, which includes new methods of financing, contracting, and operating these new and highly complex building systems, could facilitate the complicated transition required throughout the entire building process: First, it would support the initial design and engineering of components which can be more easily maintained and replaced. Second, it would promote high-quality production, based on durability and performance rather than lowest initial cost. Last and foremost, it would enhance the operation and reprocessing of components, incentivising a long-term, ongoing collaboration between the suppliers of building technologies and the clients and users whose spaces are conditioned by the formers’ systems.

More than many other users and operators of commercial real estate, universities tend to have a long-term commitment and attachment to their locations and their campuses. The size of such campuses also provides an economy of scale which is difficult to replicate. More significant still, they have a social responsibility to lead the way towards better and more efficient practices, particularly those that involve a more efficient and responsible management of energetic and material resources. These and many other factors makes them the ideal testing ground for new methods of construction, organization, and collaboration.

In September 2016 a consortium of companies, ranging from component suppliers to façade fabricators, installed a pilot project temporarily replacing a section of the façade on the low-rise building of the Faculty of Electrical Engineering, Mathematics and Computer Sciences at TU Delft, commonly known as the EWI building. This pilot project demonstrated the state-of-the-art in façade-integrated technologies, and acted as anchor point and collaboration catalyst to further develop the complex system of contracts, financing structures, and operational services required to turn the Façade Leasing research project into a feasible and implementable proposition. 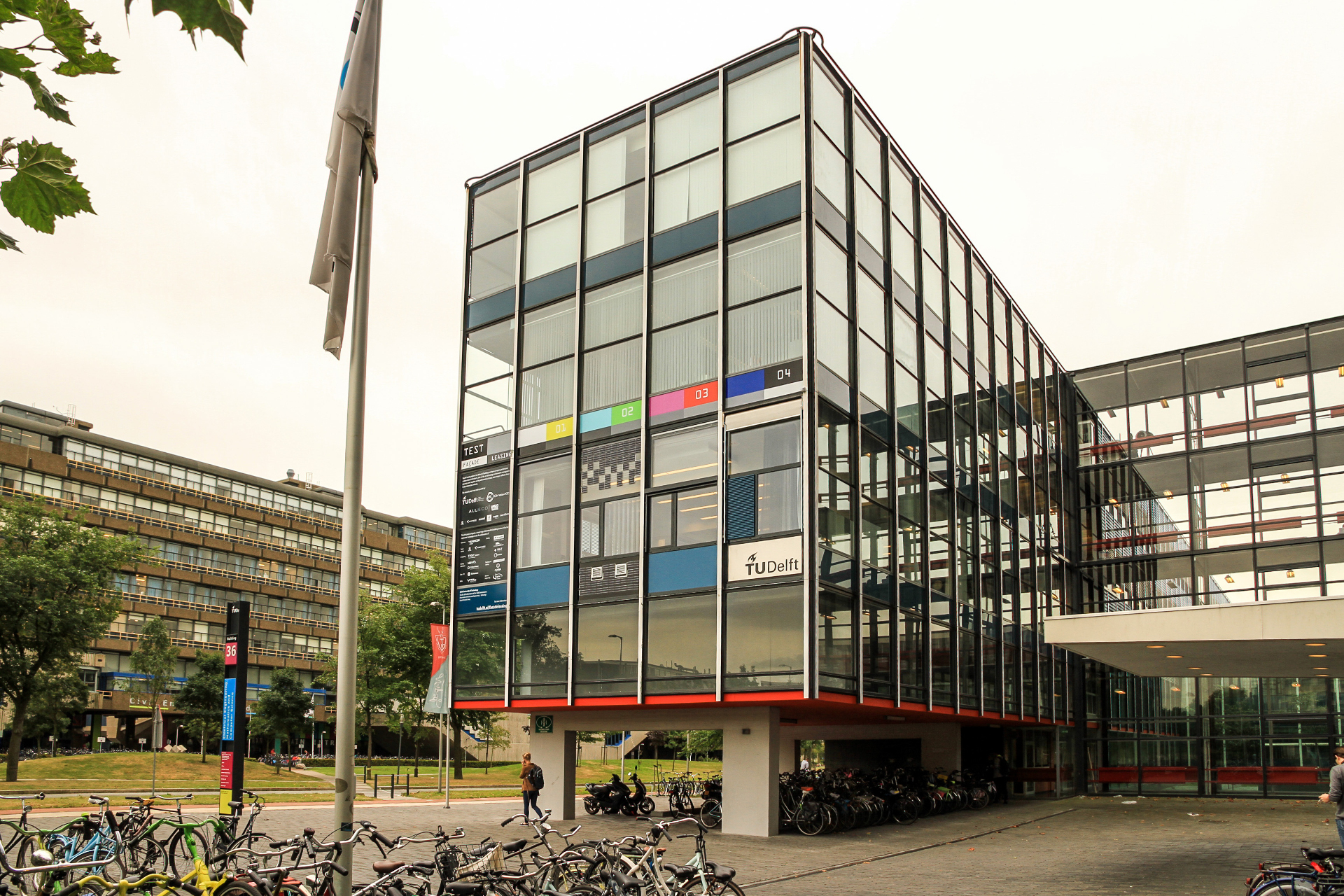 This solution does not seek to address the particular problems of the EWI building’s future, but instead uses the building’s representative quality as an icon of modernist architecture. Building such as the EWI, which are quickly reaching technical obsolescence, also display a degree of standardization and modularity that can make them the ideal target for deep energy retrofitting action, and hence for the implementation of new business model such as the one proposed by this project.

In early 2018 the project consortium has received further funding for the upscaling of this research pilot project to a large scale practical demonstrator case-study. The target building, methodology, and objectives of this new project stage are currently being discussed, and will be made public on this website as soon as they have been agreed upon by all parties involved.

While the 2016 EWI pilot project focused on the showcasing of available decentralized façade technologies, this demonstrator case-study brings together architects, builders, developers, and managers of buildings, as well as lawyers, financiers, scientists, and business developers, to produce the first practical example of a Façade-as-a-Service performance contract.

Q: Is there any relation between the Façade Leasing pilot project and the future of the EWI building (36)?
A: No. The EWI building has been chosen as a demonstration platform due to its iconic modernist design, representative for a large number of buildings which could benefit from the Façade Leasing concept. This does not mean the technical packages exposed in the mock-up are being considered as an alternative for the EWI building, or indeed that any connection exists between this research project and any future plans for the EWI complex.

Q: What kind of technologies are included in this pilot project?
A: The pilot project demonstrates a series of state-of-the-art decentralised technologies, meaning they can operate independently of central systems and conditions specific rooms and spaces according to occupancy. Some of the technologies planned and/or built into the mock-up include high performance framing and glazing, diverse solar shading mechanisms, air-handling and conditioning systems, energy generation and storage, self-supporting green façades and media screening technologies. For additional information please contact the research team.

Q: Can users and visitors of the campus submit their opinion of the system and the concept?
A: Yes, and moreover they are invited to do so. Please contact the research team.

Architecture and the Built Environment